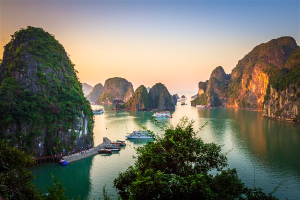 Known as a UNESCO World Heritage Site, Ha Long means “descending dragon” with dragon being an important creature in the Vietnamese culture. Ha Long Bay is composed of over 1,500 islands and islets spanning across Vietnam’s Gulf of Tonkin in Quang Ninh Province. Book a tour if you are staying in Hanoi or enjoy a Ha Long Bay cruise to see the islands up close. 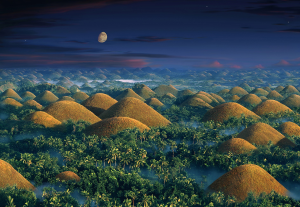 Have you ever wondered how chocolates would look life if they’re an actual landscape? Bohol, in the Philippines, is home to Chocolate Hills—a group of over 1,500 mounds that turn green during the rainy season. The hills differ in size and legend has it that they were formed after two giants fought and hurled boulders and sand to each other. 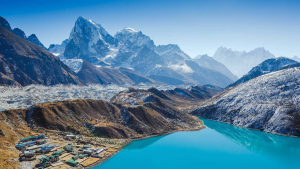 Nepal is known for its majestic mountainscapes, being home to the highest mountain on Earth—Mount Everest . But Mount Everest is just an icing on the top as Nepal is also home to a series of six glacial lakes known as Gokyo Lakes. These lakes can be found in Sagarmatha National Park, where Mount Everest can be found too. For avid trekkers, a visit to Gokyo Lakes will also give you a chance to hike the mountain Gokyo Ri. 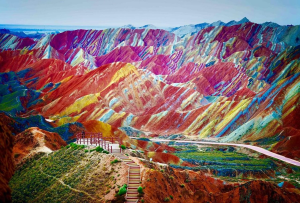 Want to see colorful mountain ridges? China has them for you. Found in Gansu Province, Zhangye Danxia National Geological Park is also a UNESCO World Heritage site known as the “Rainbow Mountains of China”. It is characterized by red cliffs and multicolored ridges. Here’s a tip: visit from June to September when the sun and a little rain brings out a more stunning play of colors. 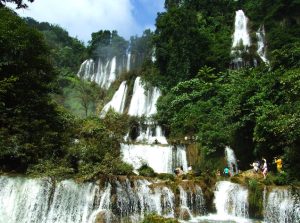 Waterfalls are yet another natural beauty to chase. Located in Umphang Wildlife Sanctuary, Thi Lo Su Waterfall is the largest waterfall in Thailand. If you’re looking for a spot that’s a little off-the-beaten, Thi Lo Su Waterfall will give you just that. Although it has three waterfalls that converge together, not all are accessible but there’s a viewing deck that will allow you to get a glimpse of its majestic beauty. 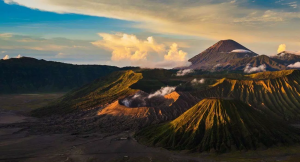 Mount Bromo is one of the most visited mountains in Indonesia. Specifically situated in eastern Java, Mount Bromo is actually an active volcano that’s over 7,000 feet. It is surrounded by what is known as the “Sea of Sand”, a plain of fine volcanic sand that gives the view a more dramatic feel. If you don’t want to stay longer, you can just witness its beautiful sunrise and then depart after some time of solitude as Indonesia is also known for some of the best sunrises and sunsets in the world.

Imagine yourself riding a boat through a long, dark cave and eventually being welcomed by an lush green river and vegetation with limestone cliffs as your backdrop. That is exactly what Tham Kong Lor Cave in Laos offers. It is an underground cave that is one of Laos’ most popular tourist spots.

A visit to any of these natural wonders will indeed make you realize how beautiful our world is—and will make you love traveling even more. So explore more and take snapshots of this almost unbelievable landscapes. 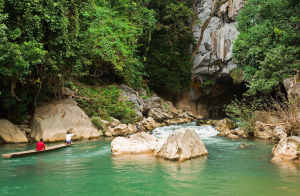 Thank you for visiting our site. I hope you find something interesting to make you come back. We’ll appreciate your dropping us a few words in the comment section and also let us know what more we can do to make your next visit more fulfilling.