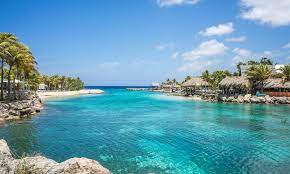 Caribbean Islands have long enticed global travelers, but the ABC islands of the Leeward Antilles tend to sway a bit under the radar. As part of the Kingdom of the Netherlands, these islands of Aruba, Bonaire and Curacao have distinct personalities and loads of quirky charm just waiting to be discovered. Here’s a basic introduction to these eclectic little enclaves just north of the Venezuelan coastline.

Deeply influenced by Mestizo culture from Spain and Latin America, Aruba glitters and shines with modern-day casinos and a lively nightlife scene. Clubs and international eateries bombard the main streets of Oranjestad, the island’s capital, where you can join locals for wining and dining at waterfront spots such as the Kitchen Table.  For sizzling-hot entertainment in Aruba, head over to Tinashi Music & Sports or Soprano’s Piano Bar.

During the day, Aruba sings to a different tune – and it’s all about the water. Jump into the action with windsurfing, parasailing, kite surfing and jet-skiing, or go outside the mainstream with a banana-boat excursion. If you’d like to explore the inner regions of Aruba, hook up with a 4×4 tour guide or saddle up for horseback riding at the Gold Mine Ranch or Rancho La Ponderosa.

As the smallest ABC Island in the southern Caribbean, Bonaire draws a more laidback crowd of divers and eco-conscious travellers. Pristine coves and dozens of colorful coral cubbyholes provide safe havens for hundreds of fish species, with options for shore snorkeling and deep-sea diving. Go exploring at Arashi Beach, Boca Catalina and Catalina Cove, or join a group expedition to the Antilla Wreck, a German freighter that went down during WWII.

Curacao is where the colonial history of the ABC Islands displays itself in grand style with 19th-century mansions and government buildings. The capital city of Willemstad holds a UNESCO World Heritage Site designation, punctuated by the floating Queen Emma Bridge. Splashes of color paint the town’s cottages, cafes and small shops as they string along the lanes and alleyways.

If the name Curacao sounds familiar, it’s likely because of the namesake liquor that’s sold around the world. Go sipping and sampling on a tour of the historic Chobolobo Factory where Blue Curacao is made. Watch the sun set on the western side of the island, with strips of sand streaming from Willemstad all the way to Westpunt.

The ABC Islands of the Caribbean dive deep into the culture of the region while providing a fascinating glimpse into the influence of colonialism. But deep down, the islands of Aruba, Bonaire and Curacao are all about the welcoming locals, sparkling beaches, lively nightlife, fun-filled watersports, and an extraordinary underwater world just waiting to be explored.