It’s always a good time to visit Africa because the continent enjoys warm tropical conditions for a better part of the year. It’s also the place to go to experience unexplored terrains. Here are 5 least visited African countries that are definitely vacation gems.

Located off of the coast of Central Africa, this island nation is one of Africa’s smallest countries. It’s a Portuguese-speaking nation and has a population of an estimated 190,000 people. The country does have a volatile and fragile economy, which is a part of the reason why they don’t have proper infrastructure like roads. However, Portuguese speaking tourists can undoubtedly enjoy the relatively undisturbed landscapes.

There’s still a lot to do around the island nation like visiting the Obo National Park that hosts more than 700 flora and fauna species. various plantation houses showcase the country’s colonial history and welcome visitors too. There are also extensive non-crowded beaches to visit, including the black and white sandy beaches found within the Obo National Park.

Located in West Africa’s Sahel Region is Niger, a country with a rich culture and history. It once served as home to the Songhai and Mali Empires as well as the nomadic Wodaabe Tribe. It’s still a developing country and ranks low on the UN Human Development Index, explaining why it isn’t well-known for tourism.

One of its tourist attractions includes the Termit & Tin Toumma National Nature and Culture Reserve that protects endangered animals and shelters several nomadic tribes. The Gerewol Festival of the Wodaabe which serves as a form of courtship ritual is also a potential tourist attraction. 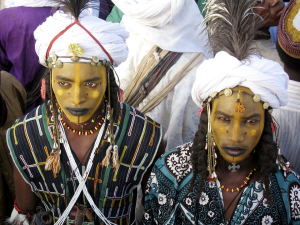 Despite allowing American Samoans/ U.S citizens to visit the country without visas, Equatorial Guinea is still Africa’s least visited country. The country is uniquely split into two regions including the mainland that hosts Rio Muni and the Bioko Island located smack in the middle of the Gulf of Guinea. The country’s capital, Malabo, is located on the Bioko Island. The discovery of oil in recent years has been generating substantial wealth for the country.

Equatorial Guinea has been promoting itself as an eco-friendly destination with incredible wildlife and beaches. 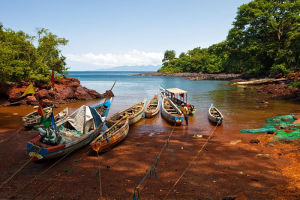 Sierra Leone has the most profound tourist potential despite its shaky history. It’s kept visitors away because not so long ago, the country battled with an Ebola crisis. However, it has amongst the best beaches in the world and once proper structures are put in place to welcome visitors in the coming years it promises to be a wildly popular destination.

The Banana Islands are by far the most beautiful of locations to visit within the country because they embody the real depiction of a tropical paradise.

The 11th largest country in Africa doesn’t attract tourists in droves because of their strict laws. In fact, they only publicized their tourist stats last in 2008 and in that year the country only received 29, 000 tourists. However, it does offer so much to see and do for tourists who manage to get through the stringent visa regime. It hosts the world’s longest cargo train that you could hop onto, but it’s quite the dirty experience.

Unfortunately, it’s also one of the destinations that tourists are often warned against traveling to because of kidnapping cases. It’s recommended for the globetrotter who feels like they have been almost everywhere and want a different experience.